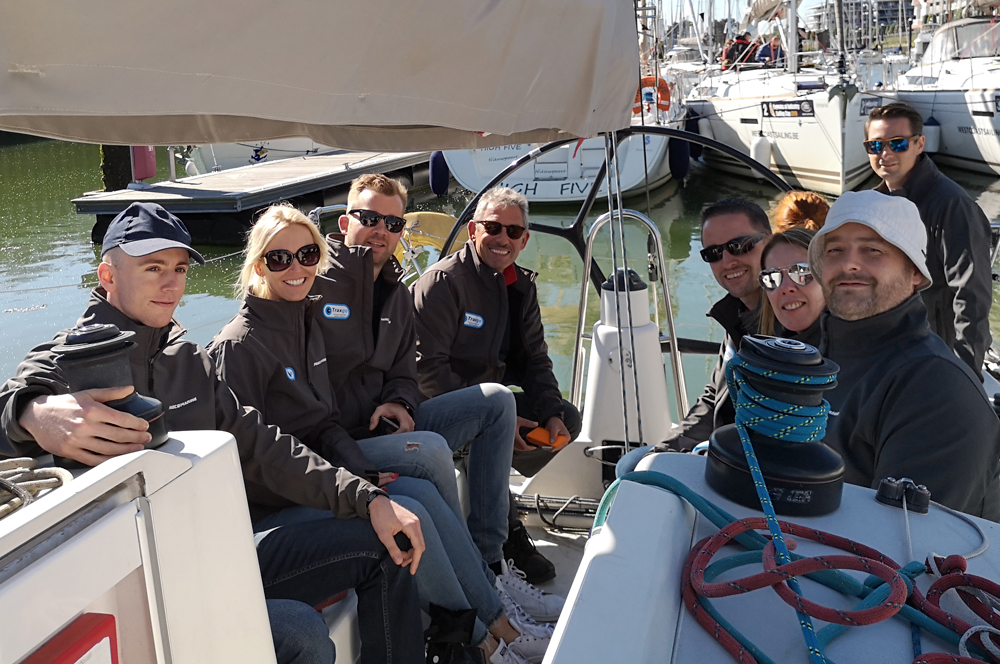 As has become an annual tradition, the Traxgo team was present at the 2019 Captains of Industry Sailing Cup. This year’s event took place at the Nieuwpoort Royal Yacht Club, where we met Freddy, our skipper for the day, after a sumptuous sailor’s breakfast. After the necessary technical explanations on board the yacht, we chose to put out to sea for the first time that day for an intensive training. Luckily, it was plain sailing for our stomachs, despite the choppy water, and we enjoyed a light, tasty lunch under a radiant afternoon sun.

Later that afternoon, it was finally time for the real work. The starting shot for the Sailing Cup sounded around 2:30 p.m. and we were able to put our previous experiences into practice on a slightly calmer sea under Freddy’s expert guidance. After a somewhat hesitant start, there was no stopping us and soon it became clear that we had no equal in the competition. After a lavish aperitif, we were proud to receive first prize that evening.

In short, the 2019 Captains of Industry Sailing Cup was an unforgettable experience in a truly magnificent setting with a resounding victory as the icing on the cake! The cup will hold a place of honour in our trophy cabinet.

Or use the form below to email us.
We will be happy to help you further.

In Flanders we have to contend with a hellish traffic network. By consulting the Traxgo services, Smart Solutions can inform customers if employees are stuck in a traffic jam or when they are only minutes away from their workplace.

Our webshop was 7 years old, we needed a trendy responsive webshop - linked to our store cash registers and our ERP system - SHOP Partner is perfect!

Mobima, mobile marketing must have the looks! The one page website that the Traxgo team developed meets that perfectly! Marketing in cyberspace and on the floor, my expectations have been met! A good partner.

The Dementia Flanders Expertise Center portal is a success, thanks for the smooth cooperation of the Traxgo team for its realization!

Lineas is the largest private rail freight operator in Europe. With the installation of the Traxgo system we notice a huge difference in terms of safety, quality and efficiency.

In Traxgo we found the ideal partner to take our transport service to a higher level. Through their system we can accurately inform customers about their deliveries. The visibility of our fleet makes it possible to test the efficiency and cooperation between the branches.

The data we collected will allow us to significantly reduce our administrative burden while offering total transparency. So it’s a win-win for everyone!

Ask for a
FREE DEMO!